My early days were pretty much spent beside my father's vinyl collection, one that contained a healthy mix of obscure and commercial music; from Young Marble Giants to Tears For Fears, Portion Control to Simple Minds, Durutti Column to a-ha. And while I must admit that I gave the latter a fair amount of spins, I never really felt like a fan.

That aside; today I read about a-ha's performance in Bergen, and also watched the video recording of the two opening tracks that was made public on nrk.no, Norway's national TV and radio broadcaster. The article's author begins by claiming that "Rolling Stones' Bergen-visit was of course bigger/grander", and "MUSE and Coldplay are of course more exciting (than a-ha)" . . . Well, I say ha-ha! Respect is due.

a-ha had the world at their feet when they released 'Take On Me' and the album 'Hunting High And Low' in 1985. It became massive and stayed in the Billboard Charts' top 20 for a long time, as well as elsewhere. They stayed at the peak for many years. But what a-ha also faced was a kind of silence in their homeland; they fell victim for what we call "Janteloven". It's a law that came to be long after the Norwegian author Aksel Sandemose wrote it down in a book from 1933. It basically says that "you shall not think that you are better than anyone else". a-ha sort of left Norway and became an English/American product instead. Thank God for that!

a-ha WAS better than everyone else, they WERE bigger (or at least as big) as most international names at the time, they sold out a staggering 200 000 crowd in Brazil (while Guns'n'Roses, Prince and others drew some 60 000). a-ha was, however, met with silence from a relatively large amount of music journalists and other "key-people" in music biz, even though a-ha's collected record sales exceeds 50 million albums and singles worldwide!

We will never, ever witness this kind of "Norwegian" success again. Not to mention international success. The Stones may have had a 20-years head start over a-ha, but are not "bigger" for it. MUSE and Coldplay may have made music that lacks emotion and, more importantly; dynamics, and are therefore by no means more exciting than a-ha. Morten Harket's voice is one of the very few that matches that of the late Billy MacKenzie of The Associates; both of which makes my hair stand up.

Noone can ever compete with the first, the last, and the only a-ha, because as far as musical success goes; they are Gods. Period.

Here's one of the best ballads of the eighties:

"And in the distance I could hear a soft voice whispering: Bigger than Beatles . . ."
By Painted Romans at August 29, 2010 No comments:

Now here's an issue that has been the talk among sound enthusiasts, mastering engineers, huge music publications and also, hopefully, bands and artists. It is the so called "Loudness War", and it talks about how modern mastering is damaging music, or put differently: Why modern CD's sound (please forgive me) awful. Mind you I'm not talking about modern music here!

Mastering music for CD purposes is not exactly rocket science, but requires skills. Although I'm sure that those skills are still present at every larger mastering facilities, I also fear that they are mostly put aside in repect for the record labels' or bands' own wishes; whom both want their CD to sound so loud it's ridiculous, just to be competitive with "everyone else".

The sad thing about this practice is that everyone who enjoy listening to music, but don't necessarily know anything about soundwaves and mastering, are the losers in this battle. Why labels and bands resist to take this into consideration is to me totally absurd. For example, the latest Metallica album was so loud that it contained continuos noise, ie clipping of the sound. This led to debates, and a storm of complaining and unsatisfied customers (fans!) who had gone out and spent money on this piece of junk. This is only one in a million examples, and it is a shame!

The facts:
When you, as a music lover more than anything, listen to a new CD, or an old remastered CD for that matter, you are more than likely to experience fatigue after extensive listening. The reason you do so is because the "sound-floor" in the music is raised in volume, so as to sound just as loud as a snare drum. The snare drum on the other hand is limited and cut, which means that it is clipping on every hit. They meet in the middle and squeeze the life out of 98% of all CD's (perhaps starting with Oasis back in 1993?) "When there is no quiet, there can be no loud" someone said, and were they right! The music sounds lifeless, dull, and just overall worse because of it.

When did the powers that be decide that listening to music shouldn't be a pleasurable activity??

Below you can see and hear a fine video by Matt Mayfield demonstrating how extreme loudness is killing music:


I am also a fan of (older) The Cure, and used to be a collector. Below you can hear the difference between the original 1990 CD-release of their fab live album "Entreat" versus the remixed and remastered 2010 "Entreat Plus" version. Just for the record: I'm glad I have the original CD and vinyl issues. . .


You might be wondering why I'm writing about this on paintedromans.com, and to answer that question I'm publishing a picture of a soundwave from Painted Romans's upcoming album. The picture clearly shows how I have chosen to master it with the natural sound dynamics intact, although the sound in general can be described as close to lo-fi. . . 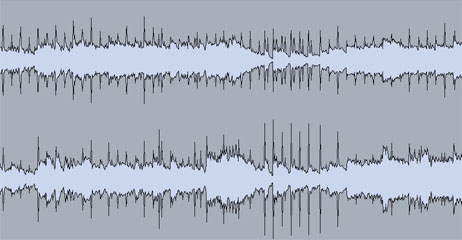 The result makes you turn up your volume, hopefully without damaging your hearing or experiencing fatigue, because as Matt Mayfield says in his educational video: "You own the volume knob, not the record producer". . .

Happy listening !
By Painted Romans at August 04, 2010 No comments: